Read More
When God Pays His Debts to a Man
Fr. Joseph Gleason

You die today. There is an unexpected accident, you and your friend are badly hurt, and you both breathe your last.

In shock, you see your own body lying on the ground, surrounded by sobbing friends and family. You try to talk to them, but they cannot hear you. 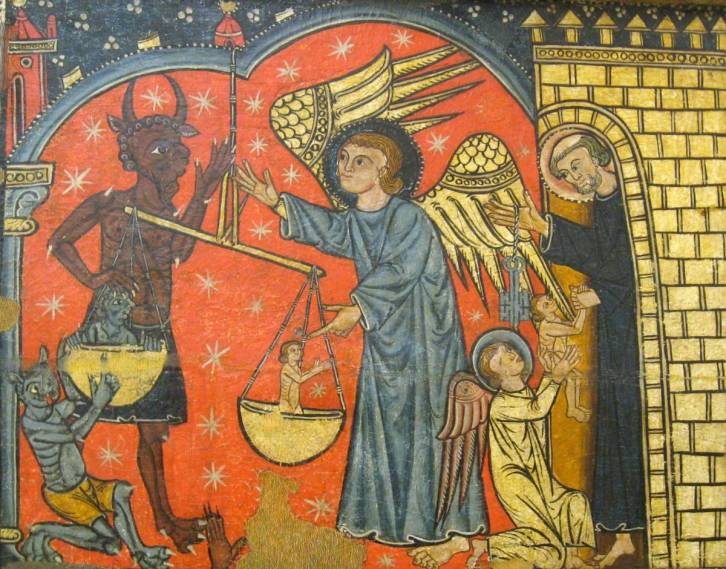 You and your friend look at each other, and you realize what has happened. You both have died, and you are about to face judgment.

Τwo shining angels swiftly approach. One is your guardian angel, and the other is your friend's guardian angel. The first one says,

"Prepare yourselves. They are coming."

Before he finishes speaking, the sky goes dark. You look straight up and find no clouds. The sun is hidden from your view, as a foul swarm of innumerable demons closes in, preparing to attack.

They completely surround you, leaving no place for escape. One after another, they begin accusing you, reminding both of you of every sin you have ever committed.

They start with your friend. At first, a guardian angel defends your friend from the attack. But then comes the demon of avarice. He says,

"For years you have carefully saved your money, planning for retirement. But you have neglected the poor. You save large amounts of money, so that you can spend the last years of your life in idleness. Yet when the poor man asks you for help, you ignore him, and you give him nothing. You have mercy on yourself, but you have no mercy on the poor."

Your friend is speechless. Your friend's guardian angel buries his face in his hands, acknowledging defeat. The earth trembles and opens, revealing a pit full of fire, brimstone, and molten lava. Terrified, your friend screams as the demon's claws grasp his throat and drag him to hell, subjecting him to unending torments. The ground closes, and then all eyes turn towards you.

One after another, each demon accuses you of sin, while your guardian angel defends you. Because you have frequently repented of your sins, gone to confession, and taken holy communion, many of the demons fly away, utterly defeated.

But then the demon of avarice returns, and accuses you. He says,

Horrified at the remembrance of your sins, you hang your head in shame. The earth trembles and opens, and you cringe in terror as the demon's claws reach for your throat, preparing to drag you into hell.

Suddenly, the heavens open, and a shaft of light illuminates everything. The demons shriek and cover their faces, while your guardian angel looks up in wonder. A voice thunders from heaven,

"Leave this one alone. This person belongs to Me."

The demon of avarice replies,

"No! This one is mine! I have recorded everything on this scroll. You know this one is guilty of all these things. A debt is owed, and it must be paid!"

The voice from heaven replies,

"But you are the Creator! You are God! How could you possibly owe a debt to this piece of filth? When has this person ever loaned money to You?"

"It is written, 'He who has pity on the poor lends to the Lord, and He will pay back what he has given.'"

A shaft of light, brighter than the sun, descends upon the demon of avarice, erasing every word from his scroll. For a moment, the scroll becomes completely white. Then a small flame appears, etching fresh writing upon the scroll. In large, charcoal-black letters it says:

"Almsgiving delivers from death and keeps you from going into the Darkness."

The demons shriek and flee in terror. The heavenly light shines upon your face, and the voice from heaven says,

"Where are your accusers?"

"Then neither do I condemn thee. My child, enter into your rest."

In the 12th chapter of the Gospel of Luke, we read about the rich man who received an abundant harvest. He worked hard, and God blessed him with fruitful crops. But this man had no mercy on the poor. He only thought about himself. He wanted to save all his money, so that he could live the last years of his life in idleness. Instead of being generous to the poor, he only saved money for his retirement. Therefore God said to him, "Thou fool, this night thy soul shall be required of thee."

The Gospel also speaks of a second man — a man who is "rich toward God" — a man who generously gives to the poor and needy. This wise man lends to the Lord. And the Lord always repays His debts.

As Scripture says, "He who has pity on the poor lends to the Lord, and He will pay back what he has given."

It is written, "Almsgiving delivers from death and keeps you from going into the Darkness." — May we all be generous to the poor, so that we, too, may be delivered from death.

The apostle John wrote the Gospel of John, three epistles, and the book of Revelation. John's disciple, Polycarp, wrote a letter to the Philippians. Throughout this letter, Polycarp quotes extensively from Scripture, including this passage from the book of Tobit.