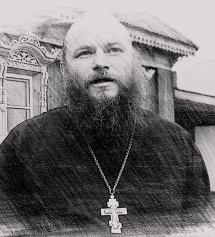 I just had a wonderful visit this morning with Alexander, a young man from a small village near Belgorod, just a few kilometers from the border of Ukraine. He and his parents used to live in Kharkov. A devout Orthodox man, twice a year he makes a pilgrimage to Rostov Veliky to visit the monasteries here.

He sat at the table with me and my family, and told us about his life. Like us, he left the city, because he prefers to live in a small village. He works for his local church, and helps with tasks on the farm.

We showed him our little farm — our cow, goats, chickens, and guineas. We told him that our family starts each day with prayer. Then we have breakfast. Then I start working my job, while my children work on homeschooling. Throughout the day, the children feed the animals and take care of them. The boys carry in wood for the boiler and the fireplace. We eat every meal together as a family. It is nice to live in a quiet village where life is peaceful.

Since Alexander is from Kharkov, I asked him about the special military operation. I said, "My family and many local friends believe that Russia is doing a good thing. Globalists started the war in 2014. Now Russia is trying to end the war. But a few of our friends don't agree. What is your opinion?"

Alexander said that the military operation is necessary. He said, "It is like when a parent tells a child not to play with an electric socket, and he does it anyway. Then the parent has to spank him, not because he wants to, but because he has to."

Alexander kindly brought us a little book about St. Ioasaph of Belgorod. My family and I were surprised and intrigued by this gift. Though many people in America aren't familiar with this saint, we love him. For many years in America, we lived in the southern tip of the state of Illinois. When we became Orthodox Christians, we found out that the nearest Orthodox church to us was in the village of "Muddy". In that little village stood a pre-revolutionary Russian Orthodox church, built in the year 1914. The patron saint of the church was St. Ioasaph of Belgorod.

It is delightful to experience such "coincidences" in day to day life here in our village. Of course, they are not coincidences at all. They are blessings orchestrated by God, and by His saints.

Share:
More Author Articles
More Author Articles
They Came to Russia from Europe Looking for the True Faith and Became Saints
When during the outbreak of the First World War, Russia’s en...
When God Pays His Debts to a Man
You see your own body lying on the ground, surrounded by fri...
Teleportation in Ancient History - The Bible Says it Happened At Least Five Times
Amazing events are recorded in Scripture, including teleport...
Nine Great Reasons to Move Your Family to Russia (And Three Reasons to Stay Home)
Wholesome families with traditional values continue leaving...
Separation of Church and State is Anti-Christian
Russia is doing the right thing, seeking for cooperation bet...
How the Russian Church Positively Influences the Russian Government
“it is encouraging that the voice of the Church is heard tod...
American Christians are upset about the elections and increasingly hopeful about Russia
For the first time, many American Christians realized that t...
Only Virtuous People Can Think Rationally
Faith is the foundation of reason, and virtue precedes coher...
Russia's Thousand-Year Christian History Makes Us Who We Are
Russians are children of St. Vladimir, and the identity of e...
Read More