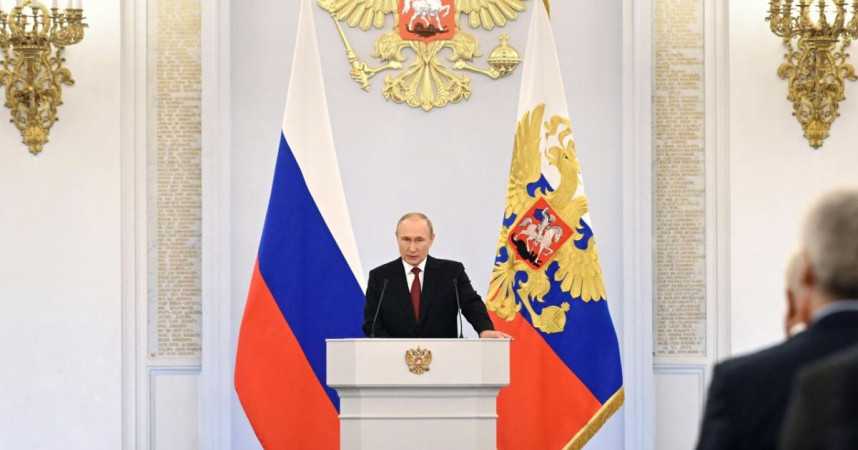 Vladimir Putin: “We will continue to defend our values and our Motherland”.

Russian President Vladimir Putin, speaking at the ceremony for signing the treaties on the accession to the Russian Federation of the Donetsk and Lugansk People's Republics, as well as the Zaporozhye and the Kherson Regions, focused on the Russia’s mission to stand up for traditional values, targeted by the Western elites.

The RF President started by stating that Russia and the residents in the Donetsk and Lugansk People's republics, in the Zaporozhye and Kherson regions, share thousand-year history. He said: “There is nothing stronger than the determination of millions of people who, by their culture, religion, traditions, and language, consider themselves part of Russia, whose ancestors lived in a single country for centuries”.

…“I want to underscore again that the insatiability and determination of the Western elites to preserve their unfettered dominance are the real causes of the hybrid war that the collective West is waging against Russia”.

“They see our thought and our philosophy as a direct threat. That is why they target our philosophers for assassination. Our culture and art present a danger to them, so they are trying to ban them. Our development and prosperity are also a threat to them because competition is growing. They do not want or need Russia, but we do. …Russia will always be Russia. We will continue to defend our values and our Motherland”.

“They do not give a damn about the natural right of billions of people, the majority of humanity, to freedom and justice, the right to determine their own future. They have already moved on to the radical denial of moral, religious, and family values”. …

“Let’s answer some very simple questions for ourselves: …do we want to have here, in our country, in Russia, “parent number one, parent number two and parent number three” (they have completely lost it!) instead of Mother and Father? Do we want our schools to impose on our children, from their earliest days in school, perversions that lead to degradation and extinction? Do we want to drum into their heads the ideas that certain other genders exist along with women and men and to offer them gender reassignment surgery? Is that what we want for our country and our children? This is all unacceptable to us. We have a different future of our own”.

“Let me repeat that the dictatorship of the Western elites targets all societies, including the citizens of Western countries themselves. This is a challenge to all. This complete renunciation of what it means to be human, the overthrow of faith and traditional values, and the suppression of freedom are coming to resemble a “religion in reverse” – pure Satanism. Exposing false messiahs, Jesus Christ said in the Sermon on the Mount: “By their fruits ye shall know them.” These poisonous fruits are already obvious to people, and not only in our country but also in all countries, including many people in the West itself”.