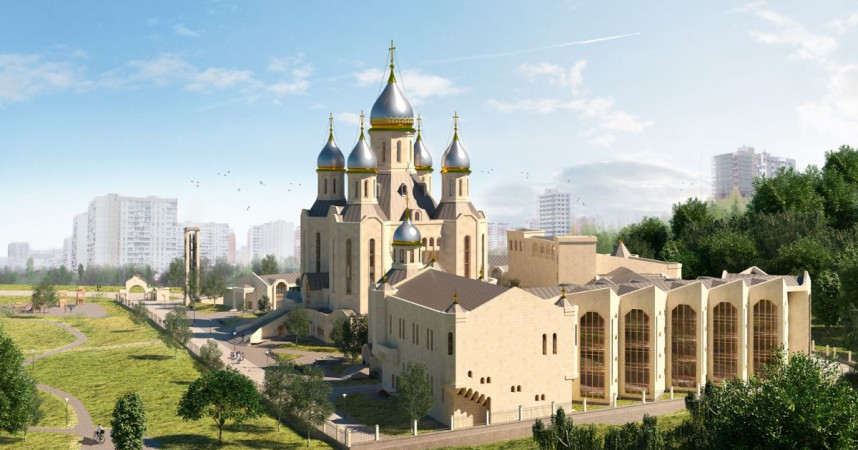 Twenty New Churches to be Built in a Moscow Precinct

The ancient Russian capital was far-famed for centuries, not only because of the splendid outlook of its churches, but also because of their quantity. Alas, many of those cultural and religious treasures were savagely destroyed during the Communist rule. Meanwhile, the Moscow population has grown quite substantially.

"The southwestern precinct of Moscow presently has 56 Orthodox churches, but 19 of them are located in temporary structures," says the spokesman for the Moscow church construction project. Thus, twenty new lots have been recently approved for building new churches.

Construction is funded by private donations from individuals and companies, both small and large. For instance, Nornickel, a mining company, has pledged nearly a billion rubles for the church “Olympic” complex in the North Butovo neighborhood.

The “Olympic” nickname is due to the intent of making the new church a religious center for Russian athletes. It will be dedicated to Prince St. Dimity Donskoy (fourteenth century). The complex will include a historical museum with a panoramic display of the Kulikovo battle, an educational facility housing a high school and Sunday school, a spacious concert hall, fitness and workout units, a shelter for women and children in emergency, and a dining hall.

A park, a playground and an athletic field are also planned for the adjacent territory.

Share:
Go to Channel
News
Colors of Russian Military School Blessed by Orthodox Bishop
Psalms, prayers, and sprinkling the banner with holy water
Russia Has an Excellent Annual Christian Film and Arts Festival - This Year May 22-29 in Crimea
Large scale Slavic Forum of Arts is held in Russia every yea...
US Journalist Visits Russian Church Under Fire in Ukraine
Artillery shelling of a monastery . . .
Ukrainian Orthodox Church described ban of UOC parishes as criminal
Banning canonical Orthodox parishes in Ukraine undermines ef...
Top News
Common Cause of Those who Love the Lord: New Life for Ancient Churches of Russian North
Russian Spy Chief: US Tries to Subvert Russians Spiritually and Morally, Like They Did Successfully in Ukraine (Patrushev)
Popular 19th c. Russian Saint Destroys Some Liberal Heresies Which Are Common in American Christianity Today (Branchianinov)

Patriarch Kirill addressed the archpastors, pastors, monastics and all the faithful children of the Russian Orthodox Church
Head of Russian Church Makes Major Address to Russian Senate, Full Text and Video With Captions
One of the Greatest Russian Monasteries Is in a Battle Zone in Donbass - Holy Mount
Urgent Need for Gov't Subsidies and Encouragement of Large Families - Head of Russian Church
More News
Related News