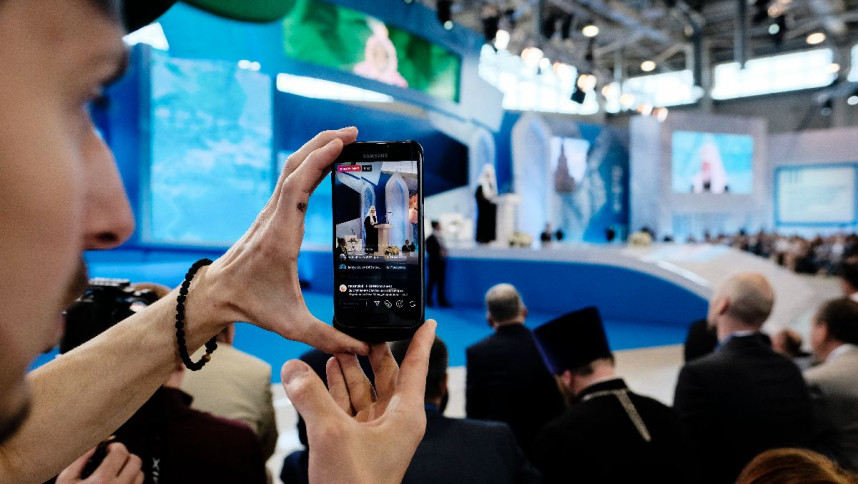 The Church and clergy on social media
Read More

Any clergyman who participates in discussions on Facebook, Twitter, LiveJournal and other online communities must constantly remember the responsibility that is imposed on him by speaking in a public space. People look at you primarily as priests. The careless and sometimes outrageous statements of individual clergy cast a shadow on the entire Church of God, causing waves of reciprocal discussions in the blogosphere, in which the subject of attacks becomes not so much the author of the lines him-self as the Russian Orthodox Church as a whole. Nobody forbids you to participate in the life of Internet communities and leave your comments in the topics, but it is necessary to act with judgment and discretion.

Report at the Diocesan Assembly of Moscow, December 23, 2011

Report at the Diocesan Assembly of Moscow, December 28, 2012

In the development of social networks, I see one very important positive phenomenon - the revival of the epistolary genre. The second half of the 20th century saw the dying of this genre. People stopped writing letters, and instead everyone called each other on the phone. How-ever, the process of writing a letter is very disciplinary for the mind. Any thought put on paper becomes the property of a wide circle of people especially if there is feedback and others can immediately react to this text critically. It disciplines a person very much. The ability  of expressing thoughts in writing is one of the most important indicators of a person’s culture.

I encourage the clergy to participate in this exchange of information with a very high sense of responsibility. You cannot just chat on the Internet and present your thoughts in such a way that people perceive them as the thoughts of the Church. Therefore, on the one hand, I urge the clergy to make more active use of these new “envelopes for correspondence.” However, on the other hand, given that the responsibility is growing, I propose to prepare very seriously, both spiritually and intellectually, to participate in this kind of work.

Considering that the social media audience has become much younger, we can say that consumers of slander and lies directed against the Church are mostly young people. Many of them have no personal religious experience or an appropriate religious and cultural education. They often become easy victims of those whose mission has become entertainment or paid work.

Of course, there are many on the Internet who disseminate genuine information about the life of the Church and share their personal stories of turning to the saving Word of God, but the number of cynics, fans of scandals, and false revelations is many times greater. When a person asks a search engine a question related to church life, he finds a lot of lies, hypocrisy, and hatred. These are the visible results of the activity of the enemy of the human race.

The mission of the Church can and should be widely disseminated on the Internet. Blogs, social media etc. - all these provide new opportunities for Christian witness. Not to be there is to stamp oneself as being helpless and careless for the salvation of your fellowman. Now, when there is a huge interest of the social media in church life, albeit not always healthy, it is our duty to turn it for good, to create conditions for young people to know about Christ, and to know the truth about the life of churchgoers. This is a large and painstaking work to which we are all summoned.

At the same time, the Church lives not in the virtual, but in the real world, in which good deeds are done, pastoral participation and love are manifested, in which, finally, the Divine Liturgy is celebrated. The image of a person who lives primarily in the media space is far from the Christian ideal. The beauty of God’s peace cannot be replaced by the space for communication artificially created by people. I also address this remark to the pastors, for whom the Internet sometimes replaces real communication with the flock. A virtual mission cannot substitute for a parish work, but should only supplement it.

The life of a modern person is largely concentrated on social networks, which for some are becoming a universal, but far from the most reliable source of information. Social networks are also a vast field of activity. Informational, missionary, and youth departments are making some effort to make the language of social media a working language for the Church’s mission.

We have no right to be absent from where our flock is or may be. Our flock today is represented on social networks, and that part of our flock is the most active. If we are dissatisfied with the reaction of the flock to some event, including church life, the question arises: what have we done to prevent this reaction? How active are we in explaining the position of the Church? How active are we in discussing urgent problems?

Speech at the meeting of the Supreme Church Council Moscow, April 29, 2015

Such a sin as vanity is becoming very widespread and pervasive in our time. This is largely facilitated by the development of the media, or what we call the information society. Every person has the opportunity to say something that becomes known to many people, including through social networks. If you take a closer look at what happens in these spontaneous discussions, you can see a fair of human vanity. Their goal is not so much to find the truth, as to expose some people as more intelligent, resourceful, and perceptive than others.

Sometimes people who are not ready to participate in all this get pulled under the millstones of this discussion - in which many participate precisely in order to show themselves, and not at all in order to reach the truth. Many consider them weak, others  outdated, lacking the skills and means of information warfare. In fact, more often than not, these people do not want to play by someone else’s rules.

All this is related not only to our life in the information society, but also very often in politics, economics, art, and culture. We see that the degree of human vanity is so high that it darkens the real achievements of people. Surprisingly, a vain person himself is the last to guess about his own vanity. Astute observers see this human weakness. Someone treats it with condescension, someone condemns it, but always a vain person turns out to be weak, vulnerable, and sinful.

So, what is vanity? According to St. Basil the Great, the vain man says and does something just for the sake of human glory. Paying attention to the spread of this sin among monastics and among churchgoers in general, the saint notes that vanity is nothing but an act, not in the name of love of God, but in the name of human praise...

... The Holy Fathers also propose a means of fighting vanity. In Maximus the Confessor, we find an extremely simple piece of advice: nothing destroys vanity as secret virtue and frequent prayer. If someone, having understood his heart, feels that certain of his actions are taking place not because they are driven by goodwill or the desire to please the Lord and fulfill His commandments, but are determined by vanity, such a person should begin to secretly do good deeds so that not a single soul knew about it. Then every-thing will become clear. If these good deeds are done with ease and joy, it means that the person has taken the path of correction. If it is unbearably painful to hide emotions, if there is a burning desire to share with someone, to say, write, or launch something into the information space, then vanity has grown through the human soul so much that it has turned into a dangerous malignant tumor.

Sermon after Great Compline on the Wednesday of the first week of Great Lent at St. Andrew’s Stauropigial Monastery, February 25, 2015

Share:
Publications
Russia an Island of Freedom in Raging Sea of Cancelled Morality
Indeed, Russia is capable to resist alien, godless, anti-Chr...
Russia Is Fighting Against Global Evil
Powerful propaganda forces in the world today are working to...
The Church’s relationship with the secular media
It is important to remember that they judge the whole Church...
Personnel in the Church’s media
For two decades of unrestrained existence of our Church pres...
Mission of Orthodox journalists
If we formulate the main task of the Orthodox media and, eve...
Response to anti-Church rhetoric in media
Today we are witnessing powerful anti-Church rhetoric, which...
Good news about the Church
What do we mean by the word “publicity”? If publicity is aim...
The Church’s tasks in the media space
The presence of the Church in the media space is a big topic...
Glossy culture
The mass subculture has such a strong influence on young peo...
Modern television
We still have some television broadcasts that create an illu...
Anonymity on the Internet
Modern man spends an enormous amount of time on the Internet...

Heritage
Artem Oganov: «A scientist who is dishonest is a dead scientist»
Science does not forgive dishonesty. Unfortunately, the category of scientists engaged in fraud and forgery is not so rare. There are people who made a brilliant career using this trick. But then their schemes were exposed, since there is a time all cats eventually get out of the bag. In such a situation, nothing will save the fraudster. Science will be merciless.
Most Interesting