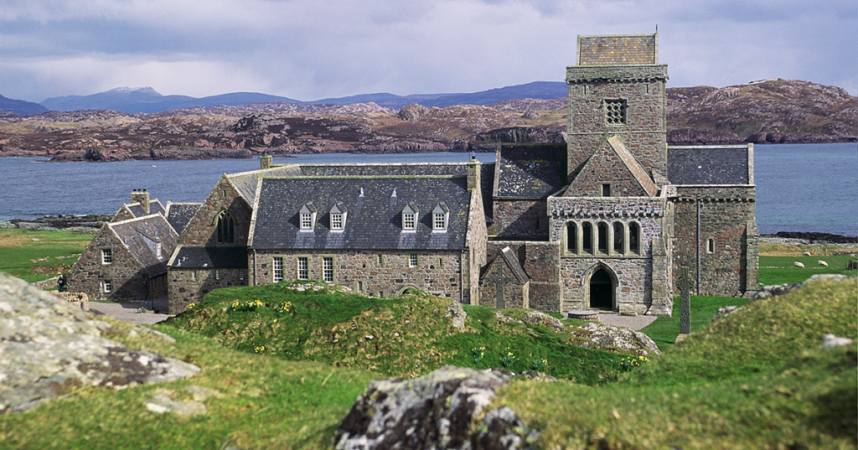 A Modern Pilgrimage to Iona, First Orthodox Christian Monastery Founded in Scotland over 1400 Years Ago

St. Columba, also known as St. Colmcille, was born in Ireland on December 7, 521 AD. He studied as several monasteries before becoming a priest and traveling around Dulma preaching the Gospel. In 563 he left Ireland to travel through Scotland, spreading the Good News. Later, he founded an Orthodox monastery on the island of Iona, Scotland. There he preached and converted the local Scots to Orthodoxy. This monastery would become famous for its highly artistic ancient manuscripts, carvings, and the large number of Celtic high crosses. In the ninth century the monastery was abandoned after a Viking raid, and though it was revived some time after, it was quickly abandoned again. It wasn't until 1997 that the Catholic Church revived it once more.

Nearly 1,400 years after its founding, a group of 60 pilgrims took the trip that St. Columba may have made, from Ireland to Scotland to Iona to the monastery. They covered roughly 60 kilometers on foot and experienced many struggles. “Along the way we encountered many hardships, such as the piercing wind and long rains followed by the scorching sun. We even had to overcome some bogs knee-deep in water. But we were fortified and humbled by the thought that St. Columba himself endured similar and immeasurably greater hardship and distress as he preached the gospel on these islands," said pilgrimage leader Jamie McGowan.

After arriving at the monastery, the faithful prayed that there would be a spiritual revival in Scotland, and that St. Columba's relics would be returned to his monastery, having been taken many years before.