The church was built in 1158, a mile away from the residence of Prince Andrei. According to the story, Prince Andrei Bogolyubsky was travelling from Kiev carrying an icon of the Mother of God. His horse suddenly stopped, and the prince saw Virgin Mary, who pointed to the place where the settlement had to be founded.

As for the church of the Intercession on the Nerl, some historians believe that it was built in 1165, in memory of the soldiers who had been killed in the battle with the Bulgars, including the son of prince Andrei Izyaslav, who died of wounds soon after his return from the campaign.

What is also quite remarkable, is that the church was built in a year’s time, whereas ordinarily the construction of a church took at least two to four years.

In another unusual move, Andrei Bogolyubsky chose to have it built in a lowland flood meadow, where the river Nerl flows into the Klyazma river. To avoid flooding of the church, the architects built a small hill and laid a strong foundation. In the spring, when the river floods, the church stands on a small island and can be reached only by boat.

Excavations have revealed that the graceful structure has a strong underground part. There is a wall of white stone blocks going 3.7 meters down, and even lower. It rests on a foundation of cobblestones, fastened with a limestone mortar. The whole foundation is almost five and a half meters deep.

The building is constructed in white stone, and has one dome and four columns in the interior. The church is famous for its surprisingly harmonious proportions, which create an illusion of airiness of the building.  The walls of the church are vertical, but thanks to the right proportions the impression is created that they are slightly inclined inwards. 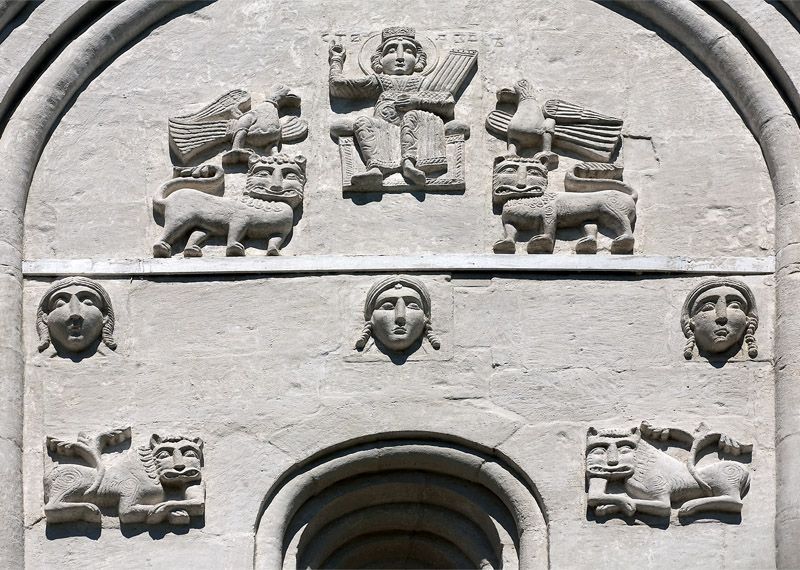 The church is decorated with exquisite carved white stone figures. The tops of three facades bear the image of the biblical King David who was often used in European architecture as a symbol of a wise and just ruler. King David is surrounded by lions. The lion is also one of the most widespread symbols of power. In the lands of Vladimir and Suzdal the image of a lion acquires another meaning - starting from Andrei Bogolyubsky, it becomes a personal symbol of local princes. Therefore, it is hardly surprising that there are many lions on the walls of the church. There is even an image of a lion - smiling.