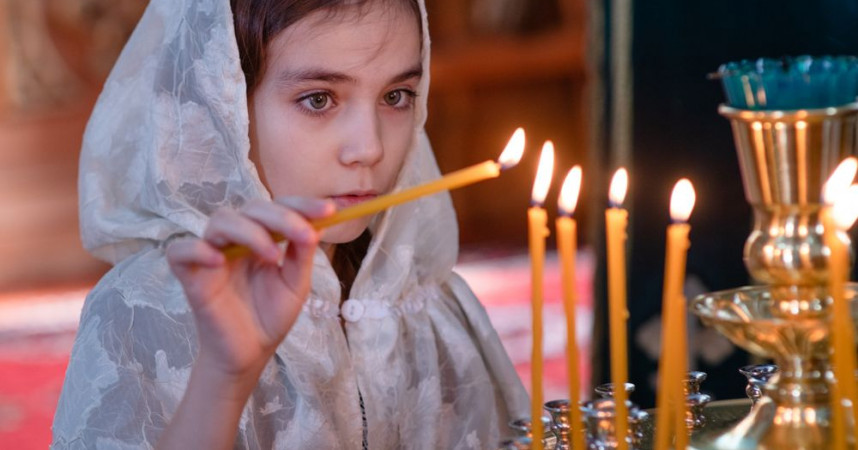 For any person who goes to Church and has children, there is a most pressing problem: how should we help our children to grow up spiritually healthy and deeply devoted to the Сhurch? No sociological research is needed to see how quickly teenagers who used to attend weekly services with their parents are leaving churches.

Common home prayer, Sunday school, and family readings of the Scripture – are not these a sufficiently effective "arsenal" to assure a child's encounter with Christ? This will be the subject of our discussion.

As a person who has not experienced the blessings of the church way of life since infancy, I have always found it very interesting to ask my close friends, priests who are not the first generation to come before the throne of God, what happened in their families, how were they brought up, how did they find faith and godliness? If we summarize these observations, than several more interesting traits emerge.

The first thing that caught my eye was the almost total lack of compulsion to pray.

No, it was not that no one ever prayed in the family. It was just that prayer was perceived as something completely internal, intimate, which could not, and should not, happen according to a "fixed schedule" or on "demand". At least, no one in these families asked for their children to "recite" all (or even partly) their morning and evening prayers at a certain age. The parents, as a rule, almost always recited it all themselves and the children saw it regularly. Sometimes (and here, it varied greatly) the children participated in it. The family prayer rule could be much shorter than even the halved evening prayer rule, and consist of several family favorite hymns, which are chanted all together, in a friendly way.

In one family like this, the whole rhythm of the father's life was strictly subject to the prayer rule, literally according to the hours: an hourly rule in the morning at the precise time, and an evening rule at 9:00 p.m. Whoever wanted to, joined in, and whoever did not want to, was not judged and certainly not condemned or punished in any way. The whole family naturally attended the service, so the question "should I go or not go?" became "should I stay home alone – or should I go to the temple with my family?" Almost always children did not come to church right at the start of the service, which did not prevent them from receiving Communion. Oddly enough, their parents did not feel any particular tension over the fact that teenage children still did not know by heart, for example, the Creed or the evening prayers.

The second is the attitude toward the fast. Here everything has turned out very differently.

In some families, children have eaten the same food as adults, that is, they observed all the requirements of the church statutes; in others, children were allowed indulgences, the extent of which was also more than flexible. In any case, violation of fasting was not perceived as a mortal sin, because of which both bodily and spiritual punishment inevitably followed.

Third, and most interesting, children got little or no "religious education": there were no Sunday schools at that time, and Orthodox grammar schools were never even dreamed of. If a family read something from Slobodsky's Law of God once a week, that was about the maximum amount of religious education a family could get. I have never heard of daily reading of the hagiographies of saints, joint discussions of biblical texts, or any "edifying" family readings.

I already can sense a hurricane of indignation growing in the soul of the devout reader: "There it is, this new breed of liberal-apostate clergy wants to cut the original foundations of church life to the ground!"

The paradox is, that from these families, absolutely all the children became, if not priests and monks, then people who were truly pious and deeply in love with the Church of Christ.

Some went straight to the seminary, some went to an institute, started a family, and after many years became priests. Everything was very different, but it was all within the bounds of Christian piety. In the end, they all became true Christians, fasting, receiving communion regularly, and not giving up their ministry even in the most critical situations of acute intra-church conflicts. Perhaps this is more than a subjective picture that has been created in my mind by my interaction with a fairly narrow circle of clergy.

But if you look closely at how today's neophytes are trying to "staff up" their conception of the piety of their own off-spring, you cannot help but notice a significant difference between the approaches to this in traditional priestly families.

After all, in the final analysis, the quality of the Christian life is determined not at all by the measure of fasting and the frequency of church attendance, not by the number or even quality of the prayers recited daily, and not even by knowledge of the stories of all the miraculous icons and the specializations of the saints in terms of miraculous help – but by something entirely different.

And this is probably the very important question that everyone must ask himself, find the answer, and, having found it, think hard about how much the pedagogical practice of piety in his family fails – or, on the contrary, leads away-from this "totally different" – but also the "most important" thing.

Share:
Publications
«Orthodox» superstitions
It is now customary to treat the superstitions prevailing am...
If you can't change the situation - change your attitude towards it
The new coronavirus which appeared a year ago not only cause...
«Children's» talk about wolves and sheep skins
The life of the parents of each child to a large extent cons...
Give a reasonable freedom of action
As all great things start from the small beginnings, so a pe...
«Looking for a husband/wife». The priest's reflections on Christian marriage.
Many articles, including by Orthodox psychologists and speci...
For an Icon to Be Modern, Tradition Must Be Alive. What is Its Main Meaning and Task?
How to teach icon painting so that it remains alive, to inst...
The Last Judgment and the Rivers of Golden Halos. What Else Did the Yaroslavl Icon Painters Leave Us? And What Do We Know About the Authors and Their Craftsmanship
The Yaroslavl icon-painting school is a kind of boundary bet...
Priest Sergiy Kruglov: «Love is Not an Inflamed Feeling, But Yourself»
The judgments and advice of Father Sergiy Kruglov - a priest...
Related Publications